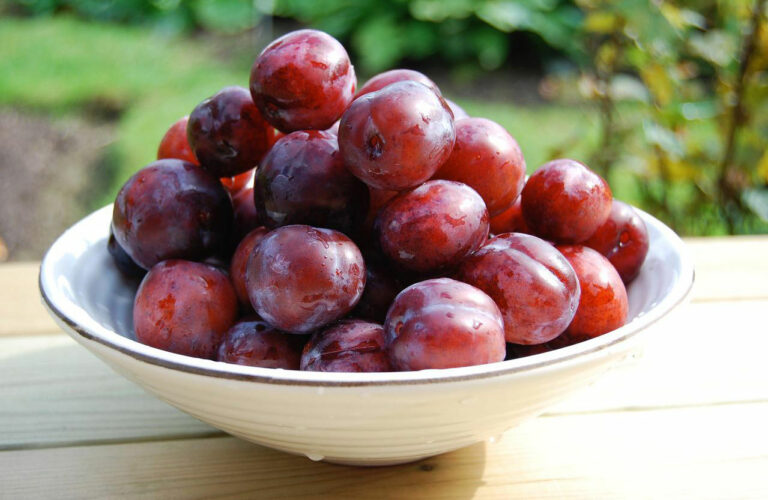 The plum is a drupe fruit that is sweet, juicy, and delicious. It is visually similar to peaches, cherries, and other similar fruits. Botanically it bears the scientific name Prunus domestica of the family Rosaceae.

It grows off a large shrub and bears a fruit that measures about 5 to 6 centimeters in diameter. It has a single depressed stem and a single hard pit. The pit is surrounded by juicy and fleshy pulp which has a tart and sweet taste.

The main plum cultivars used today include Damson which is purple or black skin, with green flesh. Then there is Greengage which tends to be firm with green flesh and skin even when ripe. Next, we have Mirabelle which is dark yellow.

Others are Satsuma plum with firm red flesh and red skin. Next, there is Victoria who bears yellow flesh with red or mottled skin. Last but not least is the Yellowgage or golden plum which is similar to greengage, but yellow in color.

Plums are available all year round in markets and stores. The best products can be found in the season between May and September. One needs to look for fresh fruit which is vibrant in color and has a whitish bloom on the surface. The white bloom indicates the fruit is fresh.

Fruits with bruises and cuts should be avoided. Also avoid very soft, slimy fruit, or those with signs of rot. At home, Plums can be stored at room temperature where they will tend to ripen. To preserve them longer they should be stored in a refrigerator.

Enjoying the Delicate Plum as a Food

The plums should be washed in cool running water to remove any dirt, soil particles, and pesticide residues. All parts of the fruit other than the pit can be eaten as a delicious snack.

Aside from eating as a snack the fruits can be cut and added to fruit and other salads. They can also be backed and poached in other recipes, usually desserts, muffins, cakes, ice-creams, and other foods.

Commercially it is used in the preparation of pie fillings, jam, and jelly preparations.

The plum contains oxalic acid, which may crystallize as oxalate stones in the urinary tract in some individuals. In such individuals, it should be avoided or eaten in moderation.

Plums are rich in antioxidants, minerals, and vitamins. They contain just 46 calories per 100 grams in weight. They are low in dietary fiber, fats and oils, and proteins. They are a good source of carbohydrates and have no cholesterol.